When I realized my 42nd birthday was coming up, I decided I wanted to do something to mark the occasion while paying tribute to Douglas Adams, whose novel The Hitchhiker’s Guide to the Galaxy, of which “42” has become synonymous with, also turned 42 this year. The novel, which I didn’t read until after I had seen the BBC series, was my first real introduction to the absurdity of existence. It remains one of my most cherished novels of all time.

I hadn’t climbed a 14K+ mountain since I was 17, though I had tried three or four times in recent years only to be met with bad luck, bad weather, and bad timing. I started eyeballing AirBnBs in the Lake City, CO area in January, but still hadn’t decided if I was going to hit Uncompahgre or go for Sneffels outside of Ridgway. I finally had settled on Uncompahgre because I spent a lot of summers in Lake City looking at it growing up.

I was even going to make the ascent 42-friendly. I bought a 42 t-shirt that says Life, the Universe, and everything. And I bought a towel that says “Don’t Panic”. The plan was to summit wearing the shirt and carrying the towel.

Well, Covid-19 happened, and though in May it looked as if it might be acceptable to travel by July, things have obviously turned for the worse. Even more ridiculous, the rentals in that area for that time were booked solid. In the past there had always been a few last resort cabins I could always turn to in any summer and find openings. There was nothing. Even a few of the campsites I checked were absolutely packed.

There was no way I going put myself in the middle of that during a pandemic, which for all intents and purposes has only gotten worse.

Instead, I stayed home and spent time with my girlfriend, Kelly, who went way out of her comfort zone and actually dressed up to hang out with me at my apartment. She would probably be upset if I showed you a picture of her dressed up, so I won’t. Instead, here is a small percentage of her dressed up, mostly hidden behind my keyboard which is uncharacteristically in front of my Gatsby-cam I use to spy on my cat, Gatsby.

I managed to squeak in a couple of traditions this year, regardless of the situation.

First, I had a German dinner (lunch actually). My current favorite German Restaurant was open, but I was not willing to risk going there. They did not offer Schnitzel to go, so I made it myself! I was actually extremely impressed with my memory of how to make it from my time working in a German kitchen at 16. It’s pork, not veal. I mean, where was I going to find veal at that hour on a Saturday? 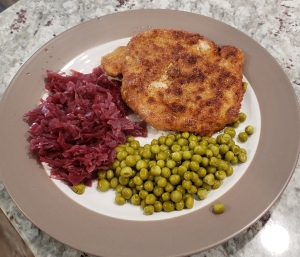 Second, I watched Return of the Jedi (well, part of it). It was late by the time we got to it, and I was getting tired. ROTJ released in May of 1983. In July, it was still in theaters and though it’s not confirmed by the ‘rents, I’m absolutely sure we went to see it for my birthday. Regardless, I’ve kept up the tradition. I try to always watch it on or around my birthday. When it came out, it was my 5th birthday and I received a TON of ROTJ related presents. I don’t have any of these anymore, but I vividly remember them. 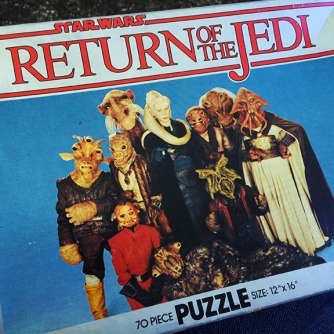 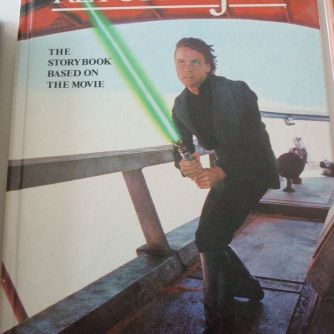 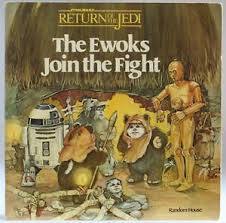 The big storybook and Bib Fortuna was not actually from my birthday, but from my aunt’s wedding which happened around the same time, and which I was a the ring-bearer for. It was a gift for being such a good little Frodo. The puzzle I remember frustrating me, as I didn’t remember seeing some of those characters. Later, after I had the movie on VHS, I watched the Jabba’s Palace scene to try and find them and still was frustrated. It turns out, some can only be seen in the full frame, and my HBO copy was cropped and of terrible quality. Until I went searching for the Bib Fortuna toy, I had completely forgotten he had the brown robe. I must have lost it almost immediately. I also must have lost the staff, but I did keep the armor piece that went under the robe for a long time.

The tradition that I didn’t succeed in keeping up this year relates to Hunter S. Thompson, who shares my birthday. I usually order a scotch for myself and a Wild Turkey for Hunter, and shoot both in quick succession. Hunter’s not my hero. I’ll never want to be like him – he was a terrible human being, but a great journalist. I only want his ability to be absurd without regret or concern for the discomfort it may cause the rest of the world. Maybe next year.